In this first collection of his Consent Factory essays, C. J. Hopkins irreverently covers the improbable rise of Donald Trump, the political dynamics that led to his presidency, and the media-generated mass hysteria that swept America during his first term in office. “Brave, original, enlightening, and hilarious” (Matt Taibbi, Rolling Stone), the essays in this volume capture the insanity of 2016 and 2017. Trump’s candidacy, the election, the Resistance, “Putin-Nazis,” neo-McCarthyism, fake news, bots, Charlottesville … the whole mad circus unleashed by America’s “insane clown president.”

“C. J. Hopkins is the rare writer who’s so good at identifying uncomfortable truths that he essentially has to be removed from consideration for mass circulation. He’s brave, original, enlightening, and hilarious, and his writing has an element of the forbidden that makes it even more fun (you realize later this is also depressing). He’s in the tradition of samizdat-type satirists like Voinovich and Mrozek who were early to capture both the horror and absurdity of a collapsing empire.” — Matt Taibbi, Rolling Stone

“History, should there be any, will record 2016 as the year of a stunning triumvirate, the simultaneous eruption of Brexit, Donald Trump, and the Consent Factory. The first two were indications of the deep anguish and anger of common people directed at the neoliberal corporate oligarchy draining the social, economic and political lifeblood from so-called Western democracies. The third was an eruption of brilliant, cutting, incisive satire in the Swiftian tradition, explaining insightfully if painfully what the hell was going on, as the corporate media and its liberal allies desperately counterattacked the populist uprising, a much bigger threat to the oligarchy than the perverted political operatives behind either Trump or Brexit. Here it is to read and remember and to explode the corporate propaganda oozing from the left, right and middle. Trumpocalypse — you lived it, now understand it.” — John Stauber, author of Toxic Sludge Is Good for You, Weapons of Mass Deception, and other bestsellers

“Is it possible these days to distinguish between political news and satire? Read C. J. Hopkins and see if you can tell the difference. Or rather, enjoy the blend.” — Diana Johnstone, author of Fools’ Crusade: Yugoslavia, NATO and Western Delusions, and Circle in the Darkness (Clarity Press, 2019)

Be the first to review “Trumpocalypse” Cancel reply 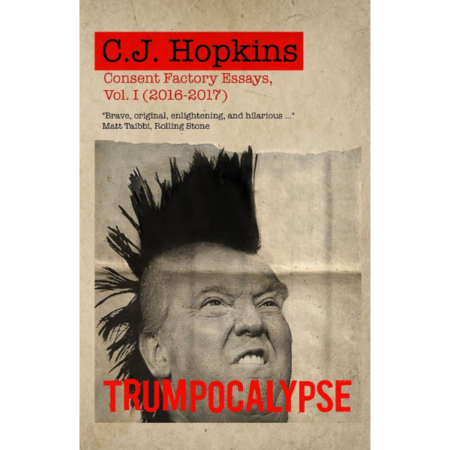 You're viewing: Trumpocalypse 12.00 €
Rated 0 out of 5
Add to cart
Sign in Create an Account
Lost your password?
Manage cookie consent
To provide you with the best shopping experience, we use cookies to store and/or access device information. If you consent, we can process your data. If you do not give or withdraw your consent, certain features and functions will be affected.
Manage options Manage services Manage vendors Read more about these purposes
View settings
{title} {title} {title}