The Pill: Atom Bomb of Contraception
Availability: In Stock

The Pill: Atom Bomb of Contraception

Once your purchase is complete, the film will appear below. You will have unlimited access to the film.

In 1960 the first contraceptive pill appeared on the US market. Suddenly, centuries of sexual mores defined by Christianity were put to a test – not to mention the perpetuation of humanity itself.

Today, the birth control pill is the world’s most widely taken drug. Over a hundred million women ingest the pill daily. Manufacturing this product is a lucrative and profitable business. New variations enter the world market at a rapid pace. While the pill has many supporters, it also has many opponents.

The so-called “third generation” contraceptive pill advertises weight loss and other benefits to attract women. Some criticise its manufacturers for not clarifying that taking this drug exposes one to higher risks of embolism and thrombosis. Even though this product has already caused several deaths, it remains on the market. Moreover, hormones from the pills are entering global water systems with potentially detrimental effects.

“The Pill: Atom Bomb of Contraception” follows the development of the birth control pill as well as its consequences. From the moral rigidness of 1950s America to the sexual revolution of the 1960s, the film highlights one of the most significant inventions of our century while asking provocative questions about the future of contraception.

You cannot order this product as a guest, but must create an account to be able to view it indefinitely after purchase.
After we have received your payment, the content will be displayed HERE ↓↓.

Be the first to review “The Pill: Atom Bomb of Contraception” Cancel reply 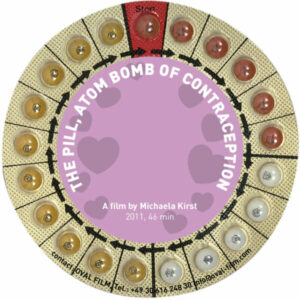 You're viewing: The Pill: Atom Bomb of Contraception 8.00 €
Rated 0 out of 5
Premium content
Sign in Create an Account
Lost your password?
Manage cookie consent
To provide you with the best shopping experience, we use cookies to store and/or access device information. If you consent, we can process your data. If you do not give or withdraw your consent, certain features and functions will be affected.
Manage options Manage services Manage vendors Read more about these purposes
View settings
{title} {title} {title}