Electro-rap curio Uffie struggles to reconcile the subversive public persona she presents in her music with her own private identity. “Fuck Fame” explores the concept of pop star-as-meme through the eyes of a young woman who feels lost in a chaotic world of her own creation.

“Fuck Fame” is a film that begins where ‘Pop Idol’ finishes. Rather than chasing the celebrity dream, Anna finds herself running away from the very things that made her famous. Even the birth of her first child is not enough to secure stability in Anna’s constant battle against her inner demons, as she continues to be flown around the world, caught up in a whirlwind of parties, gigs and sleepless nights. It is only following the untimely death of her mother, as well as a near-fatal overdose, that Anna realises that ‘being Uffie’ might end up killing her.

Leaving Anna in the embrace of her second child, “Fuck Fame” scrutinises society’s own addictions with celebrity, fame and social media, and poses the question: can being ‘liked’ by thousands of fans compare to the love of your friends and family?


After we have received your payment, the content will be displayed HERE ↓↓.

Be the first to review “Fuck Fame” Cancel reply 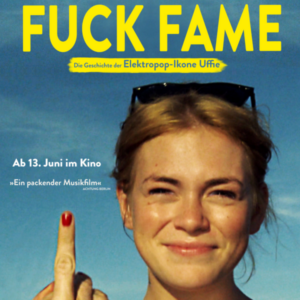 You're viewing: Fuck Fame 8.00 €
Rated 0 out of 5
Premium content
Sign in Create an Account
Lost your password?
Manage cookie consent
To provide you with the best shopping experience, we use cookies to store and/or access device information. If you consent, we can process your data. If you do not give or withdraw your consent, certain features and functions will be affected.
Manage options Manage services Manage vendors Read more about these purposes
View settings
{title} {title} {title}